Application of MODBUS Protocol in Microcontrollers

MODBUS© Protocol is a messaging structure, widely used for master-slave communication between devices.

When a MODBUS master wants information from a device, the master sends a message that contains the device’s address, data it wants, and a checksum for error detection. Every other device on the network sees the message, but only the device that is addressed responds.

There are two types of master requests: 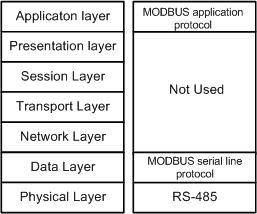 There are three popular MODBUS versions:
• MODBUS ASCII
• MODBUS RTU
• MODBUS/TCP
All MODBUS messages are sent in the same format.

The only difference among the three MODBUS types is in how the messages are coded.

MODBUS has up to 255 function codes

In ASCII mode each byte in a message is sent as two ASCII characters.

The serial transmission consist of the following bits:

For example the character “:” is sent as :

In ASCII mode, a message is delimited by specific characters as Start-of-frames and End-of-frames. A message must start with a ‘colon’ ( : ) character (ASCII 3A hex), and end with a ‘carriage return – line feed’ (CRLF) pair (ASCII 0D and 0A hex).
The allowable characters transmitted for all other fields are hexadecimal 0–9, A–F (ASCII coded). The devices monitor the bus continuously for the ‘colon’ character. When this character is received, each device decodes the next character until it detects the End-Of-Frame.

If you have any suggestions or questions, please leave a comment below.
2019-05-18T23:33:17+03:00By Yasen Stoyanov|Categories: Embedded Systems|Tags: microcontrollers|1 Comment